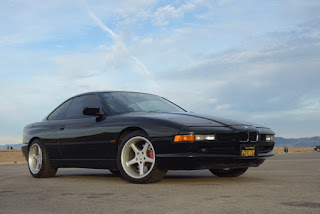 Valentine's Day is tomorrow and if you're still struggling with what to get me-- allow me to drop a subtle hint.


Kelly Carlin, the lovely daughter of the great George Carlin, is auctioning off her late father's '96 BMW.


From the auction listing:

"This 1996 BMW 850Ci shows 80k miles and is one of 363 delivered to North America with the 5.4-liter M73 V12. Finished in Schwarz over Black Nappa leather with wood trim, this example features a 5-speed automatic transmission, Electronic Damper control, an aftermarket stereo, and 18″ Racing Dynamics wheels. Comedian George Carlin was the sole operator of the car from new until his death in 2008, though it was first purchased by his business partner. It was acquired by Carlin’s daughter following his passing in 2008 and she has added 11k miles since then. Servicing in 2017 included replacing the headliner, an alignment, and passing a California smog test. This E31 is now being offered with service records, factory booklets, a clean Carfax, and a clear title in the seller’s name."