I hate the cold months.  I'm so much less productive when the weather begins to cool and I begin to find myself spending the majority of my time indoors. Normally, this would be prime time for me to concentrate on some of my creative endeavors-- this blog, some of my music projects, a book that I'm writing, etc.

A few months ago, my dog got tangled in cables and yanked my daughter's computer onto the ground, rendering it useless.  Just last week, my computer wouldn't turn on.  I tried replacing the power supply with no such luck.  My laptop just simply isn't that great, so any computer related activities will have to be postponed until after the holidays when I can concentrate on gathering funds for a replacement.

As someone who only follows the gaming world peripherally, it wasn't until only recently that I began hearing about the long awaited sequel to Red Dead Redemption.  I remembered fondly playing the original installment as someone who was obsessed with the movie Tombstone and Wild West history in general. 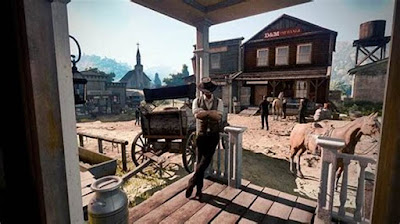 What better way to pass the time until I can rebuild my PC than immersing myself in a fictional universe for the next few months?

I don't have much of a social life to begin with, but it's not uncommon to find what little money I have burning a hole in my pocket when faced with bouts of boredom.  This $70 investment would ensure that I wouldn't be tempted to do much else besides playing this game.

I picked up RDR2 on my way home from work on the Friday it was released.  I was only able to get

While perhaps not enough time to register a thorough review of the game, it was more than enough time to remind myself that I suck at video games. Let me share with you some of my misadventures.
about an hour into the game before I had to call it a night.  I did spend the vast majority of Saturday glued to this game, but Sunday was spend watching football and catching up on chores around the house.  I maybe got another hour in Sunday night, too.

First of all-- this game is beautiful.  There are remarkable landscapes filled with unique creatures, animals, and characters (it seems I have yet to encounter a duplicate background character, as in most games).

As soon as the opportunity was presented to me, I deviated from the story line to explore the incredibly vast countryside.  It wasn't until I settled into bed on Saturday night when I realized how little I had actually accomplished within the game.

Your character, an outlaw cowboy named Arthur Morgan, can interact with just about everything on the screen.  I spend a great deal of time wandering out, seeing what I could hunt and scavenge. It's an extremely slow paced game.  As engaged as I was, I felt that I had wasted a ton of time chasing small game around the prairies, only to end up with a couple measly pounds of meat and lackluster pelts.

In my haste to abandon the restrictions of the story mode, I made a slough of mistakes that set me back considerably in my progress.

On more than one occasion, I found myself accidentally mounting the wrong horse.  Partially because I was sitting too far from the TV.  I have since moved a chair two feet from the screen since, unlike the sports games I typically play, you really have to keep your eyes trained for small details such as animals hiding in the brush and, in cases of fools like me, knowing what your stupid horse looks like.

The moment I realized my mistake, I would dismount from the horse, but evidently sitting on a man's horse is no different from theft in the eyes of the law.  I would be forced to scramble over to my horse and jam the fuck out of town as quickly as I could to evade capture.

Another mistake I routinely make is drawing my weapon on innocent passersby.

Most of the time, it seems holding the L2 button is the way to 'focus' your player's attention to an object/person to bring up an interaction menu. However,  and I'm not even certain where the distinction lies, but sometimes this makes you point your gun at people.  This, understandably, causes people to either get pissed off or terrified.  Either way, it doesn't end well.

Before I had even unlocked some of the basic checkpoints of the game, I had racked up an exorbitant bounty of $300 dollars. It was going to take an awful lot of rabbit skins to come up with that kind of dough.

I played through the story line a bit further, which helped line my pockets, but even after paying off  that enormous bounty, my errant thumbs got me into further trouble.

Your initial 'home' is a camp composed of a smattering of wagons.  Not a lot going on, but pretty accurate as far as what I'd expect an outlaw's caravan to look like.  The first town you can access is called Valentine and is laid out similarly to Tombstone, adorned with a saloon, hotel, barber, general store, and butcher's outpost.

I figured this was going to be 'the big city' while the rest of the game would be an expansive frontier with a few camps similar to your character's digs. I was sorely mistaken.

Bounties are paid at post offices located within train stations.  After clearing my bounty, I decided to celebrate my newfound freedoms by purchasing a train ticket to Saint Dennis.  I don't know why I chose that location. I think it was the most expensive ticket and the name had an air of sophistication about it.

It wasn't until I had arrived at the Saint Dennis train station that I had given any thought to the time in which the game takes place.  RDR2 is set at the turn of the century, 1899, in a fictional version of the American Southwest. St. Dennis is a busy, cosmopolitan city that reminds me of what I would imagine Seattle looked like around that time.  Another credit to the masterful visual production of this game.

Again, my clumsy hands were further tested by the swarms of people and increased police presence in this new town. It wasn't long before I had trampled someone to death with my horse, clearly riding too fast for the traffic of the bustling community.

I was able to retreat, but not before drumming up another $17 bounty.  The outskirts of this town were bayou country, ripe with 'gators.  Fortunately, I was able to hustle up the funds to exonerate my crimes and return to the city.

I decided to hitch my horse and explore the vibrant metropolis afoot, so as not to do further damage to my criminal record.  I was also getting dangerously low on supplies and I was curious as to what clothing options would be available to me in this new land.

As I was passing through an alleyway, I began to hear dialogue coming from behind the building.  I followed the exchange until I was close enough to hear what was going on. I came across a young black man pleading his innocence with a disinterested lawman. When I came upon them, the young man had been hogtied and the lawman was in the act of hoisting him onto his shoulders.

I knew better than to start shooting.  I didn't want to spend another hour scavenging to pay my legal fees. I didn't want to just stand their, either.  After all, they wouldn't have recorded the specific dialogue if there wasn't some intended purpose for my character's involvement.

I approached the officer and said something along the lines of 'go pick on someone your own size'.  The officer continued, his catch slung over his shoulder, annoyed but not overly concerned. I repeated my action and said something else brash-- this time, it bothered him.

He began to drop the perpetrator and I panicked, punching the officer squarely in the face.

So much for playing it cool.

I ran off as I had been spotted slugging out this cop and it was only a matter of time before the law was on me. I made my escape over where the butcher stand was located. There was nothing but ocean in front of me and marshals behind me, so I jumped into the water and hid out in what looked like some sort of sewer.

It seems like once you've got a warrant-- the only way to get out of it is to get as far away from the scene of the crime as possible and pay your bounty.  Since I couldn't go anywhere and I didn't want to drive up the price on my head, I just decided to let the cops take me down, cut my losses and try again.

So far it has been a lot of fun. Perhaps I'll share more of my adventures as I get more time in front of the play station. Once I get more up to speed on the game play, I'll share more of the things I like and issues I have with the game.  Maybe this is the last I'll ever speak of it.  Who knows.

If you're a fan of the ol' West or any of the other Rockstar games, do yourself a favor and check this game out.
at October 31, 2018